Get to Know: How Web 3.0 is the Next Web Revolution? 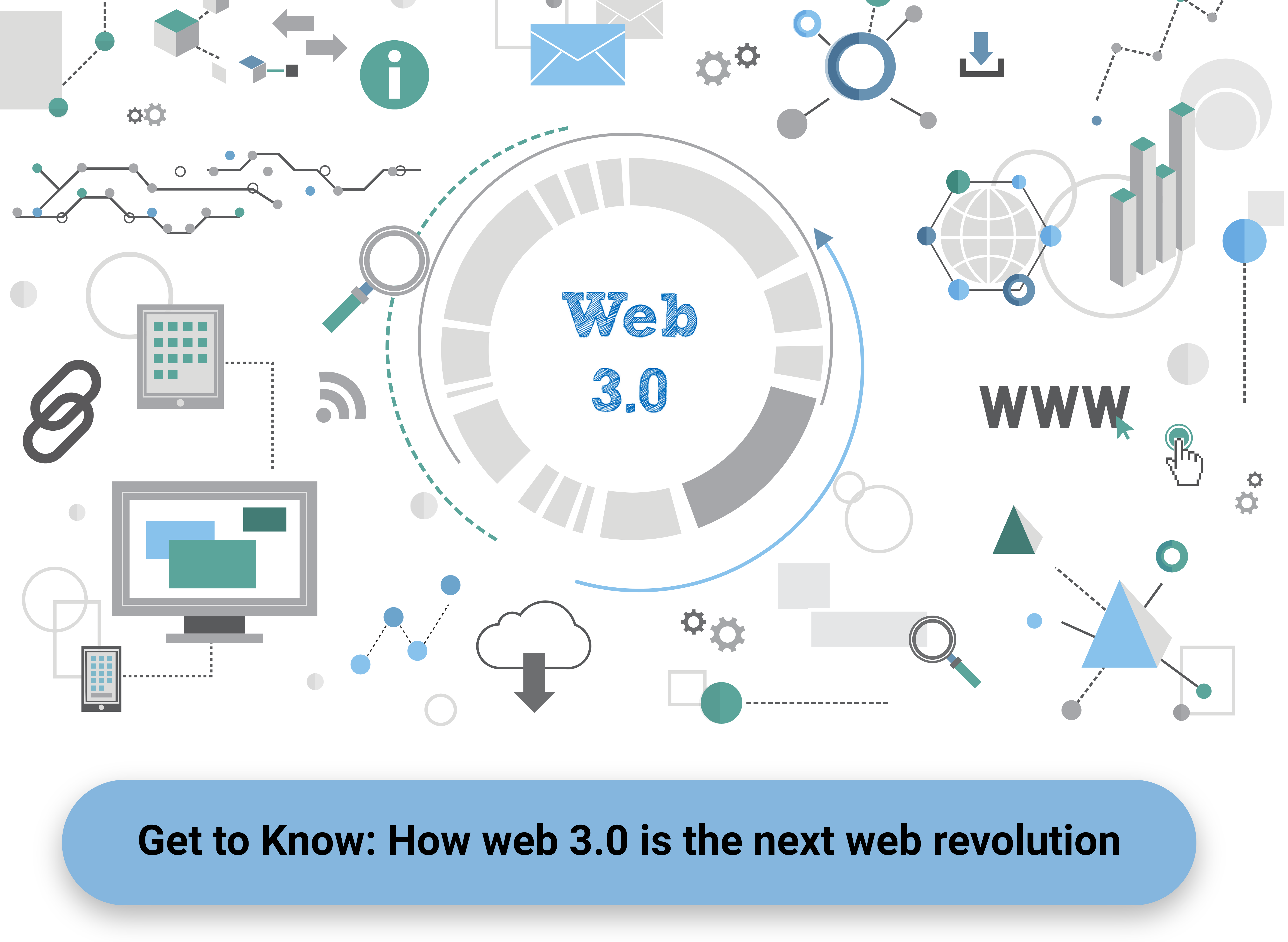 Web 3.0 is the current buzzword sweeping the Internet world, following the success of the metaverse. Web 3.0, also known as the decentralized web, is the third version of the Internet, and it is a step forward from the existing Web 2.0 Internet.

Web 3.0 is by far the most recent Internet technology, combining machine learning, artificial intelligence, and blockchain to enable real-time human communication. The cherry on top is that web 3.0 will allow individuals to not only own their data but also to get reimbursed for their online time.

In addition, web3 will empower websites and applications to make better use of data and personalize information to specific customers.

As a result, the third generation of the Internet will be one in which you may have individualized interactions with machines and websites in the same way that you would with any other human.

It's 'open' in the notion that it was created using open-source software by an open and accessible community of developers in full view of the public.

Users have the option to engage openly and privately without the risk of an intermediary, resulting in "trustless" data.

Without the necessity for approval from a controlling organization, everyone, including users and providers, can participate.

Web 3.0 will allow us to access the Internet at any time and from any location. Web-connected gadgets will no longer be confined to computers and cellphones at some time in the future, as they were in web 2.0. Technology will enable the development of a plethora of new sorts of intelligent gadgets as a result of the Internet of Things (IoT).

The goal of web 3.0 is to make Internet searches significantly faster, easier, and more efficient so that even complicated search words can be processed quickly.

Web 3.0 lacks both centralized databases for application state storage and a centralized web server for backend processing. Instead, a blockchain can be used to create apps that run on a decentralized state machine and are maintained by anonymous nodes on the internet.

Web 3.0 is propelled by three new layers of technological innovation, whereas web 2.0 was primarily driven by the advent of mobile, social, and cloud technologies.

While web 2.0 modifies currently commoditized personal computer technology in data centres, web 3.0 is pushing the data centre out to the edge (i.e., edge computing) and perhaps right into our court.

Phones, tablets, appliances, sensors, and automobiles will produce and consume 160 times more data in 2025 than they did in 2010.

Artificial intelligence and machine learning algorithms have progressed to the point that they can now make useful, and sometimes life-saving, predictions and actions.

When constructed on top of growing decentralized data structures that provide today's tech titans access to a plethora of data, the possibilities go far beyond targeted advertising into areas like:

Even though web 2.0 has similar capabilities, it is still mostly human-based.

For instance, when you use your email and password to enter into an app, when you like a video, or when you ask Alexa a question, all of these behaviors are logged and analyzed by internet giants like Google and Facebook to better target their adverts.

In layman's terms, blockchain exchange is a new layer of technology that sits on top of web 3.0. Blockchain, in particular, is the backbone of web3, as it redefines the data structures in the semantic web's backend.

Users will be able to access data in any situation thanks to decentralized data storage. Users will receive several backups, which will help them even if the server fails.

Furthermore, no entity or government agency will be able to halt the operation of any services or websites. As a result, the chances of account suspension and distributed service denial will be lowered.

End-users will benefit the most from data encryption in terms of protecting their information from leakage.

In every case, the encryption will be unbreakable. It will make it impossible for major corporations like Google and Apple to manage or use people's personal information for their gain.

The information will be available from any location and on any device. By allowing smartphones and other connected devices to access data on the computer if they are synchronized, the goal is to expand data collection and accessibility to people all over the world.

Web 3.0 will broaden the scope of engagement by allowing for frictionless payments, richer information flows, and secure data transfers. This will occur because web3 will allow us to interface with any machine without having to pay a fee to a middleman.

Problem-solving and intensive knowledge-generating tasks benefit from Web 3.0. It makes use of artificial intelligence to extract useful information from a large amount of data.

Customers will also benefit from its capacity to estimate client demand and provide individualized customer care, both of which are essential for successful enterprises.

End-users will follow their data and inspect the code behind the platform irrespective of which blockchain platform they choose.

The majority of blockchain systems are developed by non-profits, which implies that they provide an open-source blockchain platform that allows for open design and development procedures. This will help consumers become less reliant on the platform's developer.

In today’s tech-dominating landscape, people would have maximum control over their data and they may allow organizations to use their data or not.

As a result, from tailored search results to cross-platform development tools and the use of 3D graphics, web 3.0 will speed the honest and transparent use of user data. The internet will become more immersive and interactive in the near future.

Looking to embrace web 3.0 for your next project? If so, choose none other than W3Villa!

W3Villa Technologies is a major IT and blockchain development company that specializes in interactive Web 3.0 applications that are the right blend of AI and web technology. We study podcasts, blogs, social networking sites, shared news, and other technology-based possibilities to interact online with friends, family, communities, and like-minded people through Web 3.0 development services.

Key Role of Cryptocurrency ...Everything You Know About t...