Most Popular Full Stack Frameworks in 2021 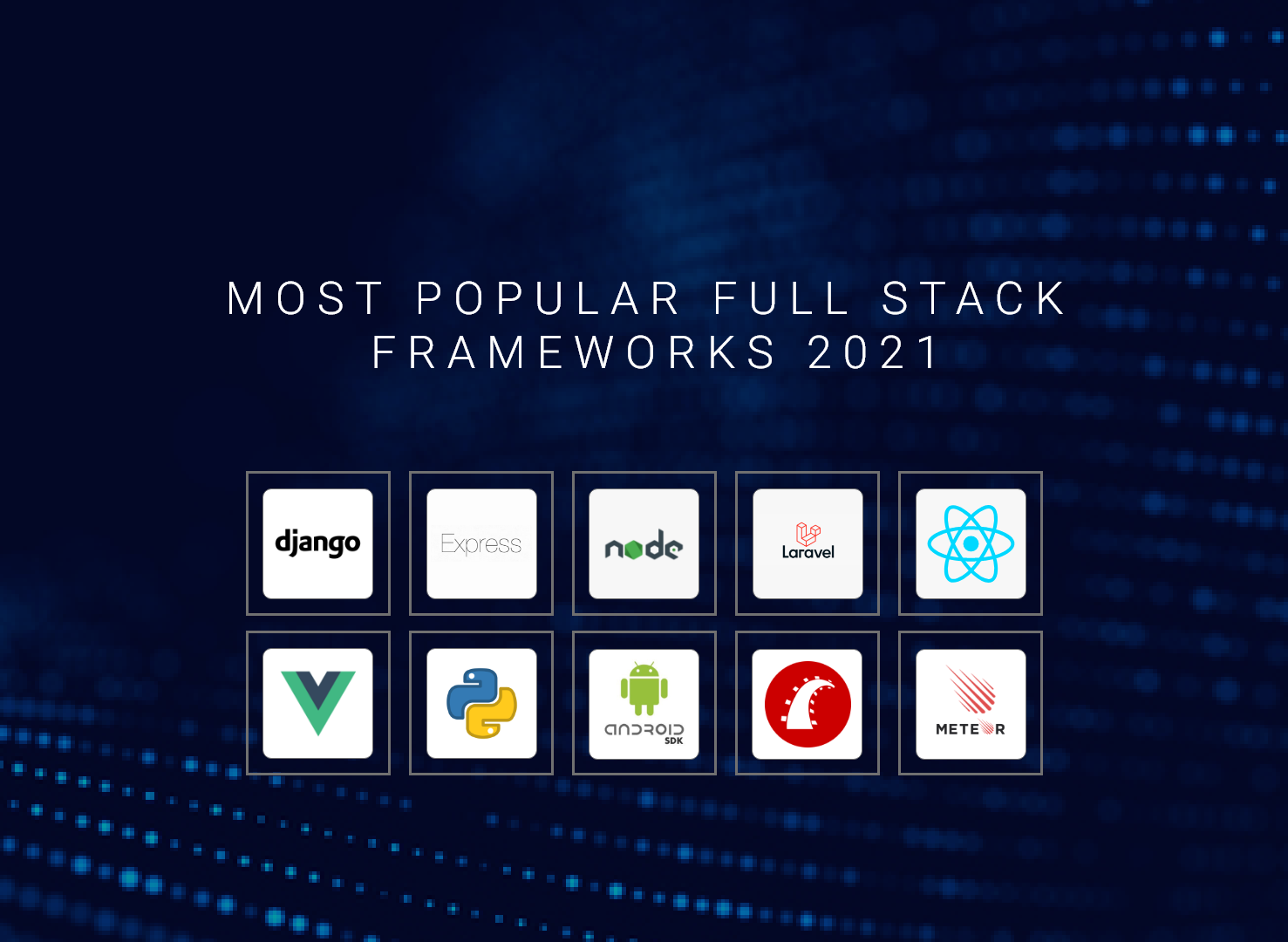 These days developers have so many options to develop web and mobile apps as there are multiple frameworks available in the market. It's irrational to try to recreate the wheel for such complex procedures, presuming you can do so.

Although businesses generally incorporate python, Node.JS, or React.JS development services, some other frameworks have gained popularity and surpassed the usual ones.

These frameworks are widely used by companies to make any complex development and some of them are quite familiar.

In this blog, we'll go over the most popular frameworks used by full-stack web developers in a variety of stacks.

Express is one of the most popular frameworks based on Nodejs for building mobile and web development. It is primarily used for providing server-side logic for web and mobile applications. There are big names such as Accenture, IBM, Uber, and slew are the few names used express who built their sites in express

Django is a Python-based open-source web framework. It provided rapid development and clean design to the developer for building applications. It takes care of the hassle of web development, the strong library, great documentation, free and paid support make it different from other frameworks. It makes it easier to create data-driven, complicated websites.

The best aspect of Django is its component reusability. It encourages developers to write fewer code words, has less coupling, and develops quickly. It also adheres to the DRY (Don't Repeat Yourself) philosophy.

Node.js is a strong javascript-based back-end framework. The javascript V8 engine is used to create it. It's a popular server-side coding framework that's free source. It runs on Windows, Mac OS, and Linux using the NodeJS runtime. It is the MEAN stack's back-end.

It also has a huge library of javascript module libraries. Choosing the right Node.JS development services for online applications that require a lot of processing power, such as video streaming sites, real-time apps, and single-page apps. Nodejs is not recommended for CPU-intensive applications.

Laravel is a PHP-based Model-View-Controller framework. It is an open-source, PHP framework, widely used by developers for building web and mobile applications. Laravel has a huge library and a strong community to provide on-time solutions for your all query. It follows a model-view-controller design pattern. The web application become more scalable and smoother in the Laravel framework.

React is a front-end library for creating user interfaces. Facebook was the one that came up with the idea. It is written in Javascript and is used to manage the view layer of web applications. Working with React necessitates knowledge of Javascript, HTML, and CSS. Although React does not use HTML, you should still study it because it will help you with JSX, which is similar.

React is used to generate reusable user interface components, which is a huge benefit. One of the biggest advantages of React.JS development services is that it cuts down on the time it takes to learn how to code from start. It saves a lot of time and work.

Vue.js has started gaining significant traction; it began as a side project and soon evolved into one of the most popular JS frameworks available. Vue has a lot of interesting features. To begin with, it's a progressive framework, which means that if you already have a project, you can use Vue for a section of it and everything will work properly. Second, it incorporates component architecture, and the Vue ecosystem may assist you in developing comprehensive frontend applications.

Python is a programming framework that is commonly used to create websites and applications, automate operations, and perform data analysis. Python is a general-purpose programming language, which means it can be used to develop a wide range of applications and isn't specialized for any particular problem. Some of the world's most popular websites that use Python development services include Spotify, Mozilla, Reddit, the Washington Post, and Yelp, which employ these frameworks.

The Android SDK provides a framework for creating Android applications. It includes libraries, application programming interfaces, example code, and a debugger. Each Android version has its SDK, which we need to install to create programmes that take advantage of the most recent capabilities. This implies that whenever a new version of Android is launched, the SDK is updated as well. It is commonly used in conjunction with an integrated development environment to write applications (IDE). Eclipse with the ADT plug-in is a well-liked option.

Rails is a Ruby-based Model-View-Controller framework. It's a popular framework with a lot of developers. Rails have a beginner-friendly framework that is being used extensively by Airbnb, GitHub, Hulu, and Shopify. Since the advantages and disadvantages are debatable, it is easier for newbies to get started with web programming. Rails has a wealth of gems, which are library-like dependencies that improve the functionality of your project while also allowing you to develop it more efficiently and quickly.

MeteorJS is a javascript-based web development framework. Node.js is used to create it. It's free and open source. For client-end operations, it can use its template engine Blaze or be connected with react and angular. It sends data to clients without the need to write any code for it. Using the publish-subscribe pattern, this is achievable. It was renamed Meteor after its initial release in 2011 as Skybreak.

Meteor has absorbed many additional technologies, including FathomDB and Galaxy, a cloud-based hosting platform. With Meteor, they offer an integrated solution for these. MongoDB, NPM, and other web development tools can all be used with it.

Hopefully, the information provided assists you in locating the appropriate full-stack development school that will teach you all of the fundamentals of website creation.

If you are looking for a credible platform to implement the right web development framework, simply visit https://www.w3villa.com/ today!