Top 10 NFT Tokens you should know 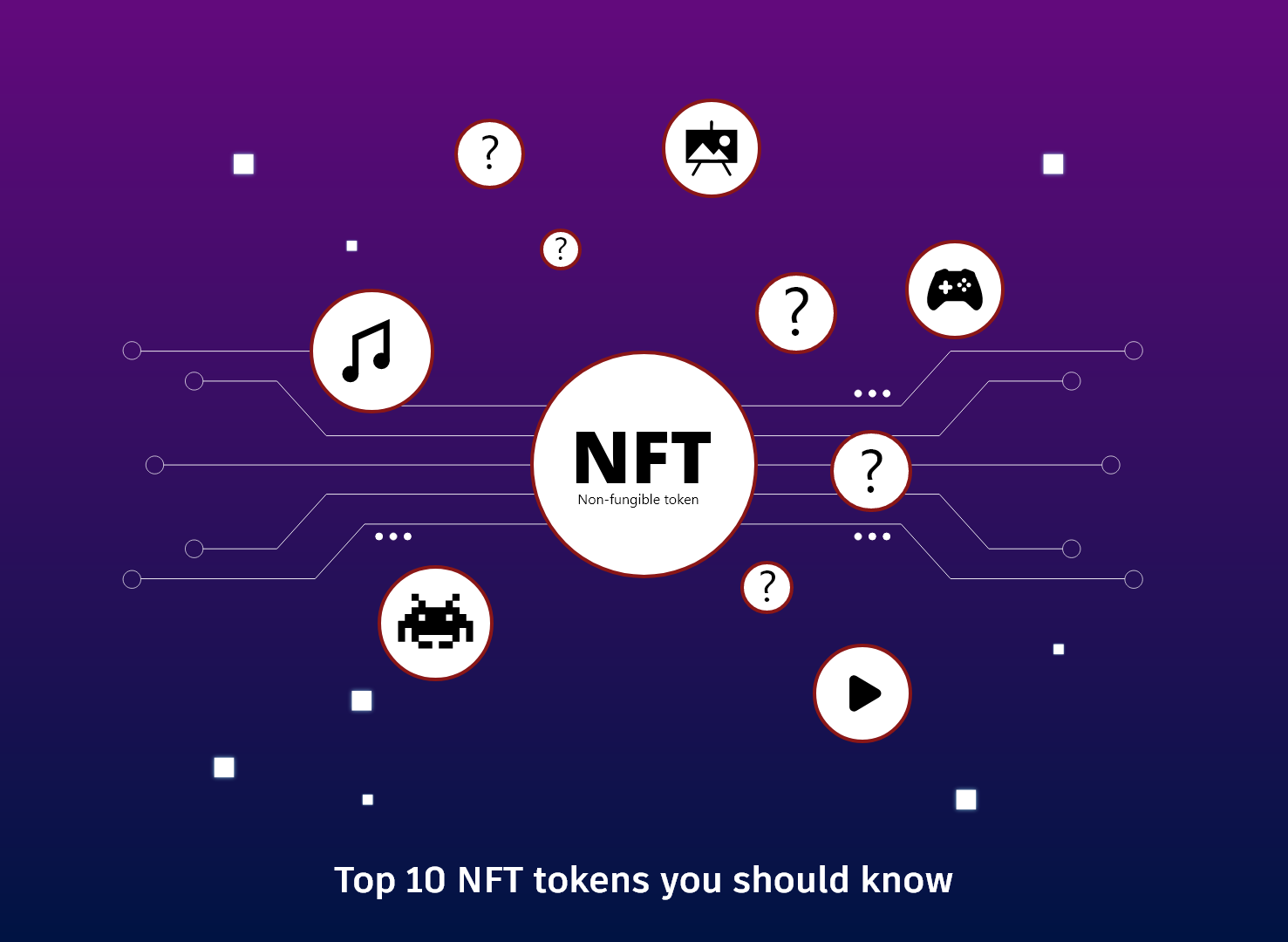 The world of digital art and collectibles is being swept by NFT tokens. Digital artists' lives are being transformed by massive sales to a new crypto-audience. Celebrities are also jumping on board, seeing it as a novel way to interact with their fans. Digital art, on the other hand, is just one application of NFTs. They can be used to show who owns a one-of-a-kind asset, such as a digital or physical deed.

Furthermore, NFTs aid in the creation of a digital certificate of asset ownership, and the buyer's possession of these tokens serve as proof that he or she owns the "original" work. Let's look at ten of the most popular NFT tokens.

CHZ Chiliz Chiliz (CHZ) is the premier digital currency for sports and entertainment and is the world's first blockchain-based fan interaction and rewards network, Socios.com. Fans can purchase and exchange branded Fan Tokens, as well as participate in, influence, and vote in club polls and surveys.

THETA is a decentralized video delivery network and an innovative new blockchain that has been gaining traction in the NFT marketplace. Theta is an open-source protocol that enables vertical decentralized programs (DApps) to be built on top of the platform to enable esports, music, TV/movies, education, enterprise conferencing, peer-to-peer streaming, and more. Theta's video streaming services are supported by a distributed network of users who contribute their excess bandwidth and computer resources in exchange for Theta Fuel (Tfuel).

It is a virtual reality platform that is powered by the Ethereum blockchain and was launched in June 2017. MANA is an ERC-20 token that must be canceled in terms of getting the non-fungible ERC-721 LAND tokens. MANA has increased by more than 7% in the last seven days and is now trading at $0.89. Its high point was $1.63 in April 2021, while its low point was $0.007883.

Tezos is a smart contract-based blockchain network that is similar to Ethereum. Tezos, on the other hand, aims to provide more advanced infrastructure, which means it can evolve and improve over time without the risk of a hard fork. Both Bitcoin and Ethereum have had this problem from their creation.

It's a blockchain-based trade and battling game inspired by popular games like Pokémon and Tamagotchi, and it was released in 2018. Axie Infinity Shards is the company's governance token (AXS). AXS has lost more than 2% in the last seven days and is now trading at more than $70. Its all-time high is $83.26 (August 2021), and its all-time low is $0.1234. Make sure you choose the right NFT exchange platform to ensure you utilize tokens efficiently.

It is a digital store of value that was launched in June 2018 and is used to underpin the value of blockchain assets such as non-fungible tokens (NFTs). The fact that all tokens created with the Enjin Platform are immediately backed by ENJ is what distinguishes Enjin Coin. ENJ has increased by more than 18% in the last seven days and is now trading at $1.90. Its all-time high is $4.00 (April 2021), and its all-time low is $0.01562 (April 2021).

It is an open-source blockchain and asset creation platform that was founded in 2014. DGB is used to compensate miners for validating the blockchain by paying transaction fees. In the previous seven days, DGB has lost more than 2% of its value, and it is now trading at $0.0645. It has reached an all-time high of $0.1825 in May 2021 and a low of $0.00002028.

Flow is a decentralised and fast NFT token that will support the next generation of apps, games, and digital assets. The FLOW token is required for both the network and the apps that use it. FLOW has lost more than 5% of its value in the last seven days and is now trading at $21. Its high point was $46.16 in April 2021, while its worst point was $1.50.

Non-fungible tokens (NFTs) are a new sort of investment that is gaining traction by the day, with exchanges reporting multi-million-dollar sales this year. High-net-worth people (HNIs) and ultra-high-net-worth individuals (UHNIs) have expressed an interest in them (UHNIs).

Looking for the best NFT exchange platform? If so, your search ends here!

W3Villa’s NFT marketplace brings together artists, creators, and crypto enthusiasts on a single platform to create and trade top NFTs. Purchasing an NFT is a straightforward process after you've connected; you only need to browse through the various collections or search for something that catches your eye, then submit an offer and wait to see whether it's approved.

To know more about the NFT Marketplace click here: https://www.w3villa.com/blog/how-to-develop-an-nft-marketplace-ultimate-guide