Why industries are shifting to blockchain technology? 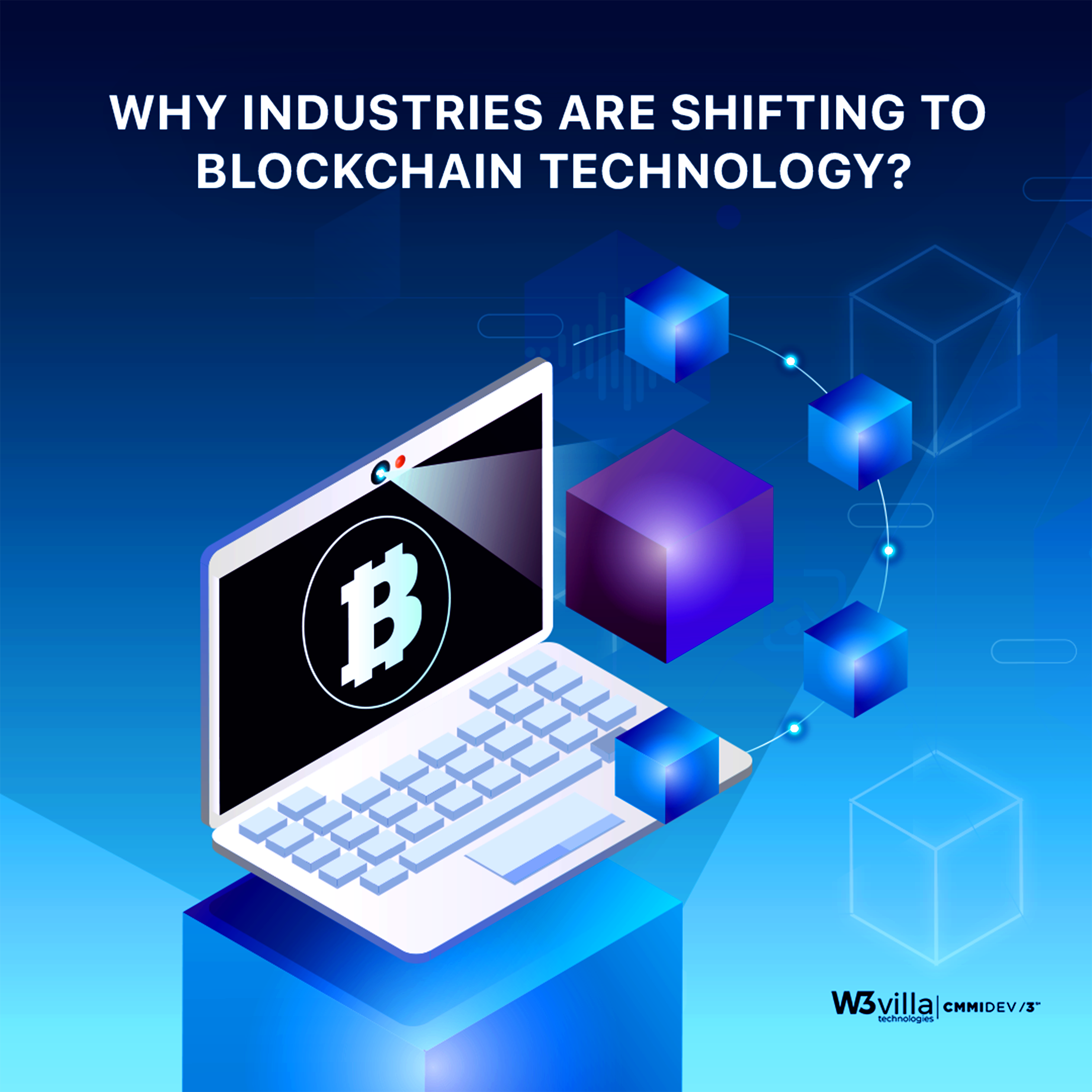 During the next two years, the worldwide blockchain market is predicted to grow by 80%, from $1.2 billion to $23.3 billion.

Many industries are exploring methods to incorporate blockchain solutions into their infrastructures, from health to banking.

What could be the reason?

To streamline corporate operations and keep up with the pace of business, as well as to provide transparency, traceability, and cost savings.

Before heading to the reasons why industries are shifting to blockchain technology, let’s discuss what it exactly means!

What Does the term “Blockchain” Mean?

The blockchain is a collection of linked data blocks, as the name suggests. Nothing can be removed from the ledger or audit trail, but new blocks can be inserted to add more data.

Since it offers a unique combination of capabilities not achievable with other digital technologies, it is now employed for a wide range of applications in a variety of industries. These capabilities include the ability to create permanent, immutable, signed, and time-stamped records of asset ownership, identities, transactions, and contractual commitments that may be communicated in near real-time among all participants of a business ecosystem.

When a Blockchain development service is paired with "smart contracts" and the Internet of Things (IoT), business transactions can be expedited.

7 Reasons Behind the Popularity of Blockchain Solutions Among Industries

Here’s the list of the reasons that companies are choosing blockchain solutions.

The fact that the transaction log for public addresses is open to sight is Blockchain's most distinguishing feature. This adds an unparalleled layer of responsibility to financial systems and organizations, holding each sector of the corporation accountable to behave with integrity in the company's growth, community, and customers.

Another reason behind the popularity of blockchain-based systems is nothing but their security. The increased security provided by blockchain originates from the way the technology works: blockchain generates an unalterable record of transactions with end-to-end encryption, thereby preventing fraud and illegal activity.

Thanks to its decentralized nature, Blockchain solutions eliminate the need for middlemen in many operations, such as payments and real estate. Blockchain provides for faster transactions than traditional financial institutions by permitting P2P cross-border payments with a digital currency. Property management activities are more efficient because to a standardized system of ownership records and smart contracts that automate tenant-landlord negotiations.

Blockchain solutions can handle transactions substantially faster than traditional techniques since it eliminates intermediaries and replaces remaining human processes in transactions. In some situations, a transaction on the blockchain can be completed in seconds or less. However, the speed with which a blockchain-based system can process transactions is dependent on many factors, including the size of each block of data and network traffic.

Each time exchange of products is recorded on a Blockchain, an audit trail is present to trace where the goods came from, thanks to the blockchain ledger. This can not only help exchange-related organizations improve security and prevent fraud, but it can also help verify the legitimacy of traded assets. It can be used to follow the supply chain from producer to distributor in areas like medicine or to offer indisputable proof of ownership in the art industry.

Immutability means that transactions can't be modified or deleted after they've been recorded on the blockchain. All transactions on the blockchain are time stamped and date-stamped, resulting in a permanent record. As a result, blockchain may be used to track data across time, allowing for a safe and reliable audit of data. (This is in contrast to paper-based filing, which is prone to errors, and legacy computer systems, which can be corrupted or decommissioned.)

Leaders in a variety of industries are experimenting with and deploying blockchain-based technologies to solve intractable problems and improve long-standing inefficient procedures. As an example of such innovation, Field suggested the use of blockchain development services to authenticate the information on job applicants' resumes. A high percentage of people fake their resumes, according to studies, leaving hiring managers with the time-consuming duty of manually checking the material.

Businesses may develop a fully tangible platform with its Blockchain-in-a-Box beginning kit to stand out in their market and get confidence in their enterprises.

BaaS promotes the transition from "disruptive" to "mainstream" use cases for blockchain, which can be applied to a wide range of sectors.

Looking for the best blockchain development solutions? If so, your search ends here!

Can Solona Surpass Bitcoin ...Know Here- The Future of De...